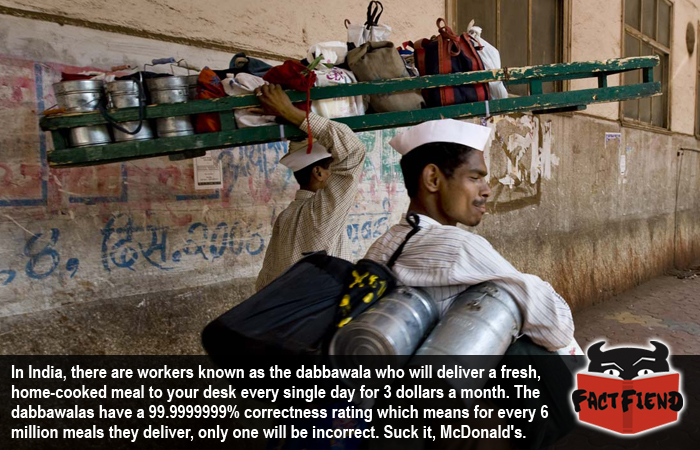 It’s often said that “everyone makes mistakes” well we think it’s about time they added “unless you’re a dabbawala” to the end of that phrase because seriously, those guys make everyone else look like chumps.

The dabbawala, sometimes known as “Tiffin-wallahs” are a a group of deliverymen tasked with making sure tens of thousands of Indian workers get a piping hot, home-cooked meal every single day. The dabbawalas are legendary amongst businessmen around the world for their dedication to their jobs and they’ve been known to not stop working during freaking monsoons! Because hey, guys gotta eat, right?

But here’s the best part, the figure quoted above, the one about dabbawalas only getting one order out of every 6 million wrong, is a very contentious subject. Not because it’s ridiculously hyperbolic or because someone think it isn’t true, but because it’s a number some guy pulled out of his ass as a best guess. The actual figure could be way higher than that because it was derived from an off hand comment a government official made stating that dabbawalas make a mistake “almost never“.

Because the dabbawalas themselves are mostly illiterate or semi-illiterate and their overall organization and management is quite loose, getting actual figures from them is probably never going to happen. Like we said, the “one mistake for every six million deliveries” thing is just someone’s best guess from an outside perspective, as far as we’re aware the dabbawalas themselves have never admitted to making a mistake.

Now we know what you’re thinking, “of course the dabbawalas would never admit they make mistakes“, but here’s the kicker, as far as we’re aware, there is nobody out there who has ever reported getting the wrong meal or a late delivery. There are people in our office who’ve had Burger King mess up a Whopper twice in one visit and bring it up every time we eat there. A dabbawala missing a delivery would be like finding a fingernail in your fries and having the cashier ask if you found the rest of the finger, and yet, with all of our extensive googling, we couldn’t find a single confirmed story of someone not getting their order on time.

The dabbawalas are so insanely good at their jobs that universities have been known to ask them to speak to business management classes about how to snap necks and cash checks. Once, in an effort to see the dabbawalas work first hand, Prince Charles (the funny looking guy who hangs around with the Queen of England sometimes) asked to meet a bunch of them, in response the local dabbwalas told the prince they were working and blew him off. In the end, he had to arrange a meeting around their schedules, not his. Because the dabbawalas are about efficiency first and making friends second.