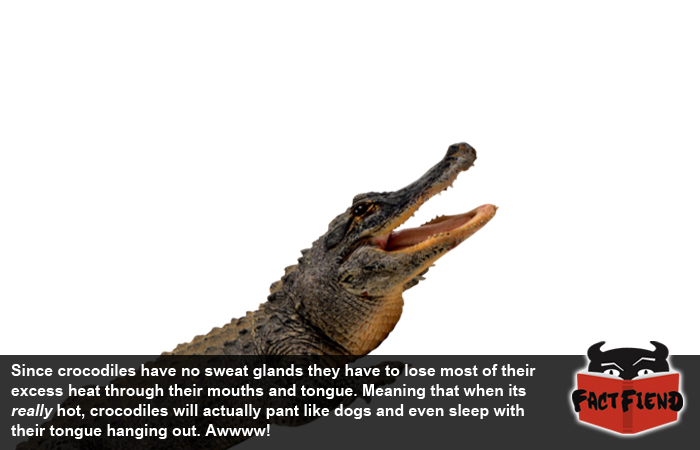 Crocodiles, or terror-logs as they’re sometimes known, are pretty god-damn scary creatures. Naturally armoured and capable of biting clean through a large fridge if sufficiently pissed off, crocodiles can effortlessly kill even the burliest human with little more than a nip of their giant toothy maw. A fact that makes it all the more hilarious that crocodiles sometimes pant like dogs.

You see crocodiles don’t possess sweat glands like us humans do and as a result are at risk of overheating if they don’t cool their body via other means. While you’d think this wouldn’t be an issue for a creature that lives in the water, crocodiles apparently spend a considerable amount of their day trying to quite literally, chill the fuck out.

To solve the issue of potentially cooking inside their own skin many crocodiles have adopted a rather ingenious and goofy way of keeping cool, sitting with their mouth open all of the time. Although it’s noted that the simple act of opening its mouth and allowing cool air to rush down its gullet is usually enough to keep the croc cool, sometimes the lumbering hunk of reptile will stick its tongue out and pant, not unlike a dog.

As if that doesn’t make crocodiles seem all kinds of huggable, the giant scaly tubes of reptilian fury are also known to casually lie down while hippos lick them. Nobody is really quite sure why hippos do this, though a popular theory is that they don’t give a fuck. However, it’s kind of hard to take crocodiles seriously as apex predators when you know the dumpiest animal in Africa will occasionally lick or nibble on its tail for no particular reason. 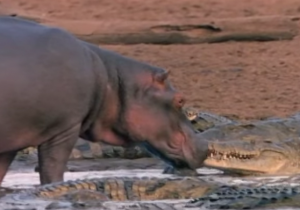 Amusingly, crocodiles are seemingly so okay with the whole “getting nibbled on” thing that they’re known to let tiny adorable baby hippos saunter over and gnaw on them for minutes at a time without reacting at all. 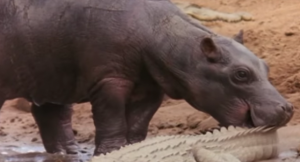 Of course we should probably point out that one of the reasons it’s believed crocodiles so seldom react to this is because no animal in Africa wants to piss off a momma hippo so it’s generally easier for a crocodile to just let a baby hippo nibble on their tail than try to scare it away. Since the latter would likely result in the crocodile being headbutted so hard by the baby hippo’s mom it turned into a belt. However, it’s still kind of adorable to think that somewhere out there, there’s probably a crocodile sitting in the sun with its tongue hanging out like a dog being gently nibbled on by like 30 baby hippos.