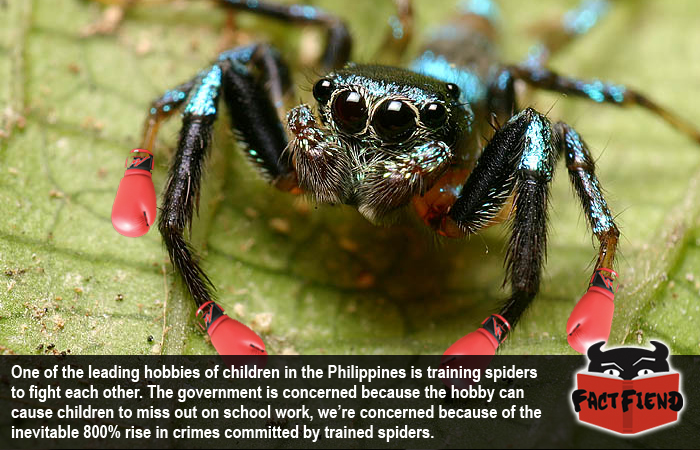 Spider fighting or spider wrestling, far from being a movie pitch for the Sy-Fy Channel is an actual sport children in the Philippines engage in to pass the time and yes, it’s exactly what it sounds like. Unless of course you’re picturing children fighting spiders, in which it isn’t and you’re weird.

Though cock fighting and indeed most other sports where animals tear each other apart are frowned upon in civilised society, spider wrestling has long slipped under the radar because the majority of the world is in agreement that spiders can go screw themselves. However, the hobby is so lucrative and time consuming that the Filipino government has actively tried to crack down on the sport in the past because of children ignoring their education in lieu of becoming the worlds most terrifying beast-master.

Some champion spiders have been known to fetch price tags of several dollars a piece, though that may not seem like a lot, remember that one, these are children and two, this is for a spider. We’re betting most people reading this would pay someone 5 dollars to take a spider the hell away from them, so paying even half that to have someone give you one that they have specifically trained to be aggressive as possible is so positively insane we’re itching just writing that sentence.

Even more amazing, when the Filipino government issued a blanket ban on the sport in schools in 1998, it was because children were so enthralled with watching spiders murder each other, they feared it was more interesting to them than learning, jeez and we though banning Pokemon cards was a dick move. Imagine being in a school were they had to ban “spider death battles” in between lessons.

Despite the ban the sport is still rather popular and is even taking some interest away from cock fighting mainly because no one gives a shit about spiders and also because spiders are easier to train and move around without risking your eyes being pecked out in your sleep. Some people have even been known to drop thousands of dollars on a single spider battle, whether or not such high stakes fights are guarded by burly men armed with tarantulas isn’t clear but at this point in time we’re going to say they are.

I guess what we’re trying to say is, don’t go to the Philippines and if you do and a kid asks for money, give it to them unless you want to risk being punched by a million tiny spider limbs at once.