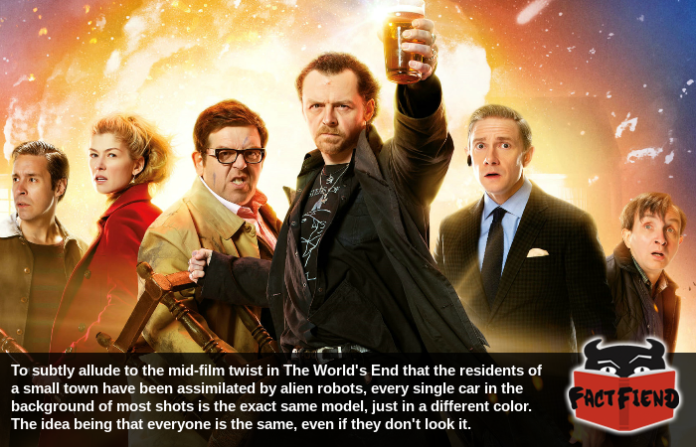 The World’s End is the spiritual end to what is colloquial known as The Cornetto trilogy, a series of films loosely connected by three men, Nick Frost, Simon Pegg and Edgar Wright. Known for his kinetic visual style and masterful, almost John Wick-esque use of Checkov’s gun, Wright never makes a film that isn’t crammed full of random, blink-and-you’d-miss-them details. Like all of the hybrid cars in The World’s End.

First though, if for some reason you’ve clicked on an article discussing The World’s End without having seen it, the film, like Shaun of the Dead and Hot Fuzz before it, is a send-up to a specific genre. In this case, science-fiction.

Along with numerous subtle and not-so-subtle nods to science-fiction classics of the past, the film is brimming with details that allude to plot points within the film itself. For example, the basic plot of the film is that a bunch of old friends meet up to go on a pub crawl and get absolutely wankered (British slang for getting all kinds of fucked up) but then aliens turn up and try to assimilate them. 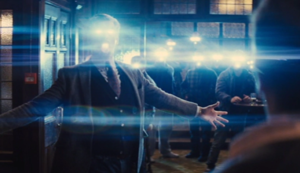 Now as is tradition in Britain, every pub the characters get drunk at has a sign outside, a sign that provides a clue to whats about to happen inside. For example, the night begins in a pub fittingly called The First Post and ends in one called The World’s End. More subtle names though include a pub called The Trusty Servant, which is staffed by a guy who is happily working for the aliens and another called The Famous Cock where Simon Pegg’s character is recognised for being an asshole several years prior and thrown out. 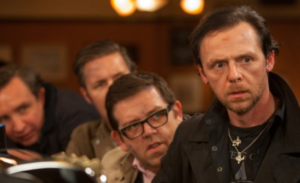 Speaking of the pubs, if you look closely each one has numbers hidden throughout the decor referring to the order in which it was visited by the group. For example, here’s the first pub the group visit. 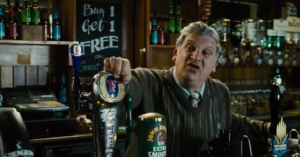 But these details are nothing compared to the ones that straight up spoil twists later in the movie. A personal favourite being the fact that every character who is later revealed to have been assimilated wears either blue or green. 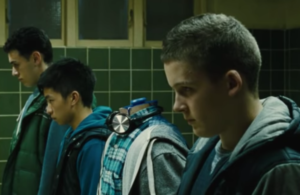 By far the most ridiculously minor detail in the film though is that the background of almost every shot featuring a street is populated with the exact same car. Specifically, the Vauxhall Ampera. A hybrid vehicle. 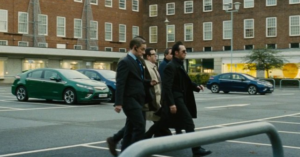 Of all the details in the film this is arguably one of the easiest to miss because all of the cars are different colors and are, for the most part, largely obscured by either the character’s themselves or just the focus of the shot. A fact that probably makes you ask, why the fuck would Edgar Wright go to the effort of populating scenes with this car if you’d never notice it anyway? Well, that’s kinda the point really.

You see, an underlying theme of the movie is conformity and the cars are supposed to be a subtle allusion to that because beneath the superficial paintwork, they’re all exactly the same. The clean, efficient nature of the vehicles also clashes nicely with the chosen whip of main man Gary King, a piece-of-shit car from the 90’s.