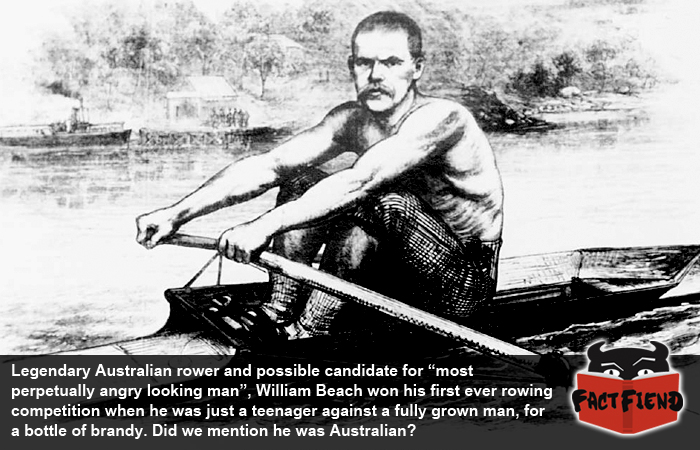 William “Bill” Beach is a veritable legend of Australian sport who was wholly undefeated at the sport of rowing for 3 years, despite being challenged for the title of world champion every couple of weeks. Unsurprising considering he’d been competing in and winning rowing competitions since he was a teenager. The only difference was that as a teenager, he rowed for alcohol, not money.

Known for his powerful, stocky frame honed from years of being a blacksmith and fending off Australia’s native wildlife, Beach was capable of cutting through the water like a silk dolphin and frequently bested opponents with such ease gathered crowds frequently celebrated his victory before he’d even finished at the height of his career, since his winning was deemed to be such a foregone conclusion anyway.

Exactly when Beach’s career first began isn’t clear, though it’s popularly claimed he got his first taste of rowing when he pushed the family’s bathtub into a river and sailed along it using a broom as an oar. Something we’re genuinely surprised we haven’t seen replicated by Jackass or at least some dipshit on YouTube yet . Beach’s first known victory at rowing was supposedly against as a publican during his teenage years, who Beach challenged for a bottle of brandy. The amused publican accepted and was subsequently bested by the teenager who promptly got drunk off his god-damn ass on victory brandy, something science tells us is way sweeter than failure brandy, the only kind we’ve tasted.

Beach’s career continued on an upwards arc for the next two decades culminating in him being crowned rowing champion of the world in 1884 when he beat a guy called Ned Hanlan. Hanlan was a native Canadian who was known for being, to use proper rowing vernacular, a total dickhead and he was infamous for humiliating opponents by doing things like rowing in a zig zag pattern, pretending to collapse halfway through races and on one occasion won by such a large margin that he was able to go back to the start of the race track and beat his opponent again.

In the ensuring race between the two, Beach easily bested Hanlan who unsurprisingly took the loss “very poorly”  and quickly tried to blame his loss on everything from the weather to the treacherous Australian tides which were clearly working in Beach’s favour. Beach, showing far respect for his opponent than he’d ever shown any of his, gladly accepted Hanlan’s offer of a rematch and beat him again. When Hanland blamed that loss on the weather, Beach beat him a third time. Hanlan, sensing that Beach was possibly controlling the tides with his moustache, patiently waited for him to retire before challenging his successor for the title and lost twice to him too. Something we’re only mentioning because fuck Ned Hanlan.

As champion, Beach accepted took on all comers, so long as they flashed the cash to make it happen and was undefeated for 3 years, during which time he rowed so often and so hard he actually collapsed of exhaustion during a race, but had such a lead that he was able to recover and win anyway.

Along with racing Beach also made ends meet working as a blacksmith and endeared himself to the local public by being a generally awesome dude, on one occasion leaping into a raging river and saving some guys life, on the way to his wedding before sprinting to the ceremony in a soaking wet suit, which we presume his wife tore off him the second they were in private and got right to work on making the 12 kids they eventually had together.

When Beach finally retired as undefeated champion of the fucking world, he remained a respected figured in Australian rowing, often acting as an umpire for important events and sometimes showing the crowd that he still had it by taking part in exhibitions which he won while gliding across the line while flexing his arms for the crowd.